About Malayali Community in Surat

October 20, 2018Comments Off on About Malayali Community in Surat

Malayali Community in Gujarat About 25 lakhs Keralites are in Gujarat. They are mainly based at Ahmedabad, Vadodara, Surat, Bharuch, Ankleswar, Bhuj, Jamnagar, Gandhinagar, Vapi, Rajkot, Bhavnagar, Valsad, Daman, Gandhidham, Veravel, Porbander, Hazira, Halol, Kalol, Mundra, Mehsana etc. Most of them are working in industries either as employees or contractors. Large numbers of people do their own business or are in Govt Service., hospitals end educational institutions Federation of Gujarat Malayalee Associations (FEGMA) was established on 27th July, 1997 at Vadodara coordinating various Kerala Samajams in Gujarat. Kerala Samajam has its own school in Surat Surat is estimated to have more than 30000 Keralites. There are Orthodox, Marthomite, Jacobite Latin Catholic, Syro Malabar, Syro Malankara, Pentecostal, Brethren denominations of Christian Community. There is an Ayyappa Temple in Surat for Hindu devotees Christianity in Gujarat Christianity is a minority religion in Gujarat. The Roman Catholic Diocese of Ahmedabad, the Roman Catholic Archdiocese of Gandhinagar, the Roman Catholic Diocese of Baroda, the Syro-Malabar Catholic Diocese of Rajkot and the Orthodox Diocese of Ahmedabad have their seat in the state The Jesuits were entrusted with the mission in 1893. They have been instrumental in the birth and growth of the mission which has led to the formation of an acculturated local Church in Gujarat. The Commander of the Mughal army in Ahmedabad called the Jesuits there in 1612-13. The Ahmedabad Mission was started in 1892 based on a missionary encyclical issued by Pope Leo XIII in 1892. During the second half of the 17th century, mission work was started in Surat. The town and harbour were occupied first by the Portuguese, followed by the Marathas, the Mughals, the Dutch, the French and finally by the English. The Jesuit pioneers were later replaced by the French Capuchins. Later more and more mission centres were established in Anand (1896), Vadtal (1897), Karamsad (1907), Nadiad (1911) and Amod (1912). The Fifties and Sixties saw further growth and consolidation of the mission. During the Sixties, Jesuit missionaries expanded their mission from Kheda to the tribal areas of South Gujarat. Now it is a flourishing mission which has expanded to more than fifteen mission centres and parishes with boarding houses for boys and girls as well as excellent high schools. The region of South Gujarat comprising the civil districts of Panchamahals, Baroda, Bharuch, Surat, Valsad and Dangs was separated from the Bombay Jesuit Province and entrusted to the Gujarat Jesuit Province in 1956, while remaining at the same time ecclesiastically under the Bombay Archdiocese. Subsequently, in 1966, this area was separated from the Bombay Archdiocese and made into the Baroda Diocese, with Mgr. Ignatius D’Souza as its first Bishop. The Jesuits who were entrusted with the mission of the whole of Gujarat, in 1973, bifurcated the Saurashtra region from the Ahmedabad Diocese, and entrusted it to the Congregation of the Carmelites of Mary Immaculate and the new Diocese of Rajkot was formed with Mgr. Jonas Thaliath, C.M.I. as its first Bishop. In 1987, Francis Braganza, SJ (1922-2011) became the second Bishop of Baroda. When he retired in 1997, Godfrey Rozario SJ, the then provincial of Gujarat Jesuits became the third Bishop of Baroda. On November 11, 2002, Gandhinagar, the capital of Gujarat, was established as an Archiepiscopal See. A Diocese of Gujarat of the Church of North India exists. The Methodist Church , CNI ,The Salvation Army and other Pentecostal denominations also have their presence. 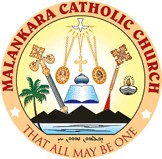 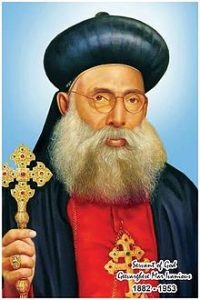 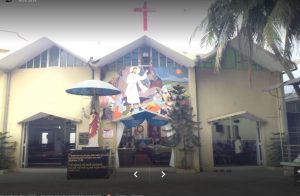 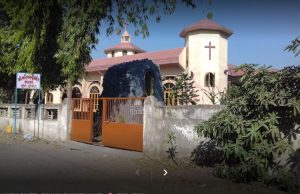 Mother Mary Church, Bhestan, Surat With earnest financial support from Bathery, Tiruvalla & Trivandrum Diocese, in 2001 plot of land admeasuring almost 2.5 acres was purchased in Pandesara close to Udhna –Sachin highway. A nursery school was started under the leadership and guidance of Holy Spirit Sisters. Subsequent to the transfer of Rev Fr Mathew Perumpallikunnel, parish and school was entrusted to Rev Fathers of Bethany Ashram. In 2007, consequent to the appointment as Apostolic Visitator of ETRI, HE Bishop Jacob Mar Barnabas  has given special care and attention  to the community in Surat and thanks to his sustained efforts, HE Bishop, Godfrey Rozarios in 2008 had given consent for having personal parish for the Malankarites in Surat. The need of independent church was badly felt and parish priests and the parishioners prayed and begged to Almighty incessantly to make this dream true. Rev Fr Mathew Augustine, OIC, Rev Fr Mathew Modiyil, OIC and Rev Fr Benedict OIC physically and spiritually supported the divine endeavour of the parishioners. As a miracle, God answered the prayer and on 3rd March, 2012,  the foundation stone of the church was laid by HE Bishop Jacob Mar Barnabas in the presence of Rev Fr Benedict OIC, the then Vicar and other diginataries, Rev Fr Joseph Noble,OIC took over as Vicar and under his dynamic leadership and enthusiasm, the first Malankara Catholic Church in Gujarat was consecrated on 8th June 2013 by His Beatitude Moran Mor Baselius Cardinal Cleemis, Major Arch Bishop-Catholicos of Syro Malankara Catholic Church. 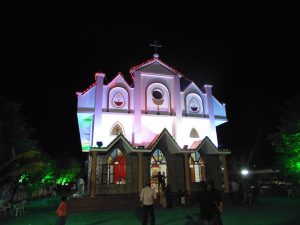 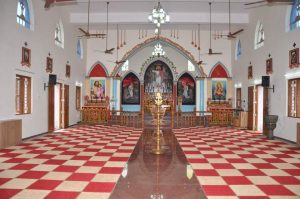 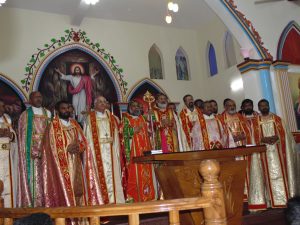 Presence of Holy Spirit Sisters(OSS) Holy Spirit Sisters (OSS) with their august presence were bonded with the community right from the inception. Their service in imparting spiritual leadership to the children and youth and bringing the community close to God need special appreciation. The development and upliftment of the community, construction of the church and its liturgical beauty could not have been possible without the valuable support and guidance from the nearby Convent and Rev Sisters. Former Vicars, Brothers, Sisters served: